History of the Dairy Diary

The history of the Dairy Diary began way back in 1968, the Milk Marketing Board launched a cookbook to be sold via the milkman, designed to support the doorstep delivery service and to encourage milk sales. The book was The Dairy Book of Home Cookery.

This book proved to be so popular, that it was revised and reprinted in 1978, 1992, 2012 and 2018. It has sold over three million copies in the UK and has become the crucial cookery ‘bible’ for many households. In fact, it was voted one of the most reliable cookbooks of all time by BBC Good Food readers.

Numerous recipe books published by the MMB followed the Dairy Book of Home Cookery, including the Pennywise cookbook and Clever with Cream.

In 1980 the MMB published the  Dairy Book of Home Management, which was a comprehensive guide to running a home, managing a garden and caring for the family. It was edited by Neil Tennant, who later went on to edit Smash Hits magazine and then form the Pet Shop Boys. Very much a book of its 70/80’s era it covered a vast range of topics, with information varying from facial exercises to tips on how to plan a funeral! 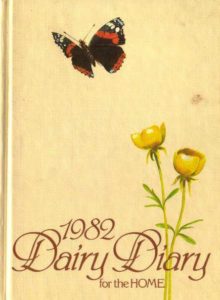 At the beginning of the 1980’s the MMB was looking for a new publication, which could be used regularly in the home whilst also promoting milk and dairy product usage. A diary containing recipes and household information was the answer. So in 1981, the Dairy Diary was born. It proved more popular than the MMB can ever have imagined, selling over 1½ million copies in its first year. The history of the Dairy Diary truly begins.

The launch of the Dairy Diary was supported by a strapline at the end of generic TV milk adverts. This was later followed by the Dairy  Diary featuring in the “dancing milk bottles’ milk TV advert.  In 1995 the Dairy Diary had its own advert which was shown during breakfast TV.

The Dairy Diary’s unique blend of food, household hints and diary pages prompted the creation of the ‘home diary’, a product sector in its own right, which resulted in several copycat diaries, who also saw the benefits of a home management publication.

Following the closure of farmer organisations (MMB and Milk Marque) the Dairy Diary and associated products were sold in 2001 to an independent publisher Eaglemoss Ltd.

Throughout the history of the Dairy Diary, it has remained true to its roots and still sells via the milkman. It’s now 39 years old and still has an extremely loyal following, with many purchasers owning the full set of diaries, dated right back to the early eighties.

The look of the Dairy Diary has changed radically over the years with its design and photographs echoing the changes in fashion and food styling. Its recipes reflect the growing interest in international cuisine. As a diary, it has developed with the benefits of; spiral binding, a notes pocket, sticker sheets and the addition of a pocket-sized version.

In recent years, following the success of The Dairy Book of Home Cookery, a series of highly successful cookbooks has been published. Each cookbook features a collection of themed, triple-tested recipes created to inspire everyday cooks to produce fabulous food.

Clever Cooking for One or Two 2008

Look out for the next cookbook!